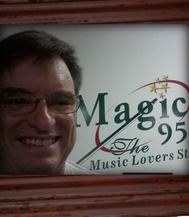 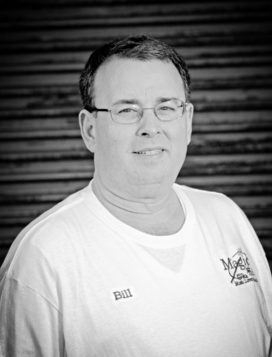 Bill realized at the age of 5, that radio was his passion.  In 1978 at the age of 15, his dream of being in radio became a reality.  With the support of his mom & dad, Marie & W. B. Cox and great influence of his guidance counselor Horace Cowell, Bill was hired by Beach Music Legendary Disc Jockey Charlie Byrd. 1320 WEEW was his first station. WEEW was a 500 watt daytime only station in Washington, NC.  As time went by and opportunities presented themselves, Bill moved on in June of 1981 to be part of the premier staff of WKJA 92.1 out of Belhaven NC.  After KJA, Bill began working in New Bern NC at Radio Joy 1450.  Bill kept his career moving by working with WNCT AM/FM in Greenville, NC. By June of 1983, Bill moved into sales as well as still being on the air when he began working at WBTE/WDJB in Windsor, NC. While in Windsor, Bill was promoted to the position of Operations Manager. Next stop on the journey was a stint as General Sales Manager at WRCS/WQDK in Ahoskie, NC.  While working at WBTE/WDJB, Bill formed a close relationship with General Manager Rick Mendelson.  With Mendelson's guidance, Bill learned the sales and business side of radio. After Bill had left Ahoskie, an opportunity to work with Rick again became available at WVOT in Wilson, NC. Bill was on afternoon drive and sales.  As Rick left, Bill went another direction and became Sales Manager at WNOS 1450 in New Bern, NC which use to be Radio Joy! The station was in the midst of being sold, and the deal fell through. Thusly in January of 1989, Bill was offered an opportunity with WDIX/WORG in Orangeburg, SC. Within 4 months of employment, Bill was offered part ownership. This was the first steps to achieving into ownership. Bill did mornings and sales. Also in July, Bill became a daddy with wife Terri. Lyndsi Durand was the perfect addition that year.  In November of 1991, another investment came in the construction of WKSY - Classy 100.5 in Florence, SC. After a few months, Bill wished to be back in NC. Rick Mendelson and a group of investors had bought WVOT. Bill got in touch with Rick and went back to work in Wilson, NC and remained there. Then in December of 1993, an opportunity came to Bill, and he felt it was time.  He bought WPNC-AM/FM in Plymouth, NC.  The station went on the air April 1, 1994, known as 96 JAMS and has been on ever since. In August of 1996 the stations formats and music were switched to Magic 96 and then in April of 2001 we became known as Magic 95.9. In 2019 Bill married his wife Elizabeth and they are the proud parents to  three four legged children, Sophie the Dog, and Addy and Bean the cats.